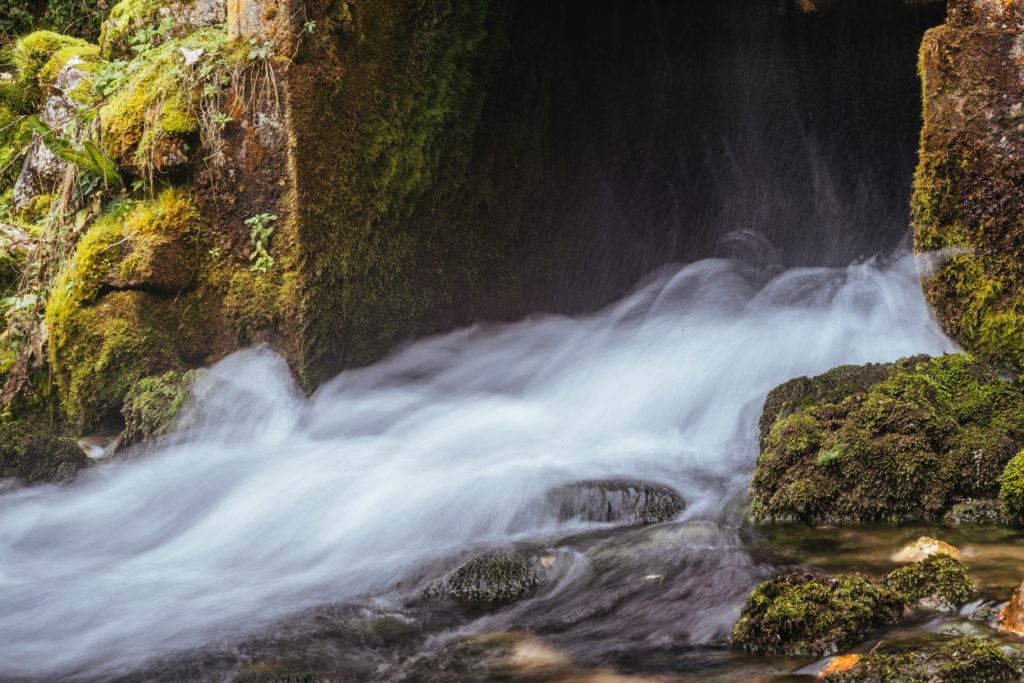 Water is an abundant resource in the small town of Sanski Most in Bosnia and Herzegovina. The name itself translates to ‘the bridge over the Sana’, the river being central to life in the town. What is more, Sanski Most is often referred to as the ‘city of the 9 rivers’, as to not diminish the importance of all sources of water that the town is supplied with. From an infrastructure point of view, the town has its own public water supply company. However, what is interesting about the town is that affordable, safe water supply has always been in place even in the furthest, most isolated villages in its vicinity through community managed water supply systems.

This was made possible when villages collectively contributed to building, maintaining, managing, and supplying their households with water, often from sources or springs of rivers and streams, and sometimes with ingenious methods dating as long as decades. The development of such small scale water supply systems, in community ownership, did not always survive until present day. With the modernisation and expansion of the public water supply company, some communities agreed to give up their responsibilities and have their water supplied by the company, especially since most rural communities did not have the necessary financial means to repair or replace old equipment.  But while most followed that path, some communities decided to keep their independence in that matter only seeking support when serious maintenance and repair is needed.

The water supply system of the village (Bojancici Vodovod) dates back to 1974. Before the system was put in place, locals and their farm animals all drank the water from the Zmajevac source. However, the residents had to carry the water in buckets all the way up the hill for their household needs. They drank the water as it was: untreated, unfiltered, straight from the source. A local resident, shoe maker by profession first initiated the idea of a community level water supply system. At the time, there were only around 11 households in the village. The entire community contributed to building their own water supply system: the finances, their time, and hard work. An architect from Sanski Most designed the entire project. Two reservoirs were built: one at the source, housing a pump and the electrical installation. From the first reservoir, the pump takes the water all the way to the second slightly up on the hill for about 70 meters. At the second location, pipes were installed and the water is then directed to each household. The locals refer to the water supply system as divided into two eras: before and after the war. After, newer and more efficient pumps were installed, ‘the best you could find in those times’.

Now there are around 50 households in the Bojancici village, though the locals who live there say that only around 30 are inhabited all year round, the rest serve as village homes for all their Bosnian neighbours who emigrated. The village has its own council made up of 4-5 residents elected through majority voting. This is done unofficially, on a smaller scale than even the ‘mjesna zajednica’ – or local community association that all towns and villages have. The locals joke about such meetings just being called any time, and happening in someone’s garden. The same council also makes decisions on behalf of the residents concerning water and the water supply system.

A resident was chosen to be responsible for the monitoring, inspection, and maintenance of the water supply system. They go to the source reservoir every couple of days to check the water levels, and handle all repairs needed, most often for the pumps. The maintenance person is also responsible for collecting money for the water, and every month they get compensated with a wage of 2KM (1Euro)/ household for this work. The rules of the water supply system are unwritten, and mostly related to times of drought. If the water levels are too low, then the village implements water reductions. It is said that people don’t need to be told, or warned, simply every time this happens residents know it is time to reduce their water consumption. There have been conflicts in the past, but very small scale. Namely on one occasion, a local resident defied the reduction agreement- they were made aware to avoid doing that, but seemingly it is inconceivable that someone would have their water cut off if they don’t abide by the reduction rules. The water is regularly tested at the local hospital in Sanski Most, and is deemed drinkable, despite the fact that water supply system in the Bojancici village has no filters, and the only purifier added is chalk. The person responsible for the maintenance recalled that one day the residents decided that they would use chlorine to purify their water. Given the instructions of the council and the advice of the public water supply system from Sanski Most, the chlorine was purchased and used as instructed. However, months later, mothers in the village complained that the chlorine had affected the children’s skin, so ever since, the water purification returned to the traditional method of using chalk.

There are two main challenges for the village’s water supply system. First, the two pumps they have are already too old: they stop working and need regular repairs, however recently they were told that given their age, it had become nearly impossible to find spare parts for them. Sometimes they can go one year without needing repair, but most often, less. The cost to repair each pump comes around 300-500 BAM (150-250Euros). Secondly, the entire system needs a general repair and renovation. The village was given a quote of 48 000 BAM (24 000 Euros) to not just refurbish the entire system, but also build a third reservoir which would act as a filtering station, thus making the water drinkable even in times of severe rainfall. The residents admit that unfortunately they cannot pool together such a large sum of money, and they get by with what they have, simply repairing the existing pumps, as long as they can. The pump used to supply the entire Bojancic village with water.

The Question of the Public Water Supply System

The Sanski Most public water supply company reached the beginning of the Bojancici village some time ago, yet the residents refuse to link into the main water supply network, and want to keep their own. There is a good reason for this, and it stems from their context: many residents keep farm animals who need a lot of water. The system they have in place is much more cost efficient for their needs.  The residents currently pay 0.3 BAM (0.15 Euros) per cubic meter of water. The price of the water is calculated based on the monthly electricity bill. The monthly water bill depends on how much each household uses, according to their water meters. In contrast the public water supply, costs almost 4 times that amount. On top of that there is also a one off fee of 1000 BAM to be paid to the public water supply company. The locals say if they had that kind of money to spare, they would rather it went into refurnishing their own system, and keeping their affordable water prices. With 1000 BAM from each household, and 50 of them currently in the village, the total sum would pay for the entire renovation of the Bojancici Vodovod. The village of Brajica Tavan, is located in the Dabar area of the municipality of Sanski Most, being separated from the town by a series of steep hills. Most local residents own summer cottages in the area, and there are few permanent residents left. In the past there used to be 32 households, but nowadays there are only 7 left. The village is surrounded by areas of outstanding beauty and right at the bottom of the hill on top of which it is located, the source of the Dabar river can be found. The source has an abundance of drinking water, and it also supplies the village of Brajica Tavan with water. However, this case is rather special, as the system itself was built by an innovating engineer from Belgrade back in the 80s. It was completed in 1988. The Technical Aspects of the Water Supply System

There are two reservoirs in place, one at the source of the river, which accumulates the water from a cave and one 180 meters up a steep hill, where the water is pumped to before being distributed to each household. The original ‘eco’ pump was designed by the famous engineer and innovator from Belgrade, Milos Jakovljevic and is still currently in operation, the most recent improvements being completed in 2014 with a grant of 2000 BAM (1000 Euros) from the Norwegian Government. The reservoir has a total capacity of 60 cubic meters, three times the size of the Bojancici Vodovod.

The pump itself is special because it does not require electricity to run and to pump the water 180 meters up on the hill, and it doesn’t even have an engine to power it, being purely mechanical. It uses the energy of the water pressure through hydraulic shock, and the pure kinetic energy of falling water to pump it to a much higher level than the source. Apart from the village of Brajica Tavan, the hydraulic pump is operation in two other locations: Celinac and Prnjavor (BiH). The village has a council to represent them at the Zdena mjesna zajednica (local community association). They are also responsible for the water supply system. Therefore, any decisions taken at the village level concerning it will then be proposed and voted on by the larger community association that they are part of. This also takes place in case they want to improve, adjust, or adapt anything related to their local water supply system. There is one person from the village responsible for its inspection and supervision. One of the main issues that concern some residents is the fact that not everyone respects the rules of moderate consumption. Sometimes the reservoir can be emptied, while the rest of the residents are left without water until it is filled again by the pump at the source of the river. The observed cases were said to be related to temporary rather than permanent residents though. The independent, self-run water supply systems all bear similarities. First off, they are built for and managed by  small communities. The resource used is a source of drinking water. Then a pump pushes the water into a reservoir or accumulation facility, in which the water is (sometimes) treated and then supplied to the households in the local community. A person, or a group of people is responsible for its maintenance, while the decision making is done by the local communities. All of these characteristics make the community managed water supply systems in the area of Sanski Most cases of commons. They are sustainable, as in the case of the Dabar community, where not even electricity is used to supply an entire village with safe drinking water. They are characterized by fair access too, where residents pay a small, affordable price (if any) for the water, and in times of drought all residents must reduce their water consumption so that everyone can still benefit. The local residents have collective control over the resource and its management. 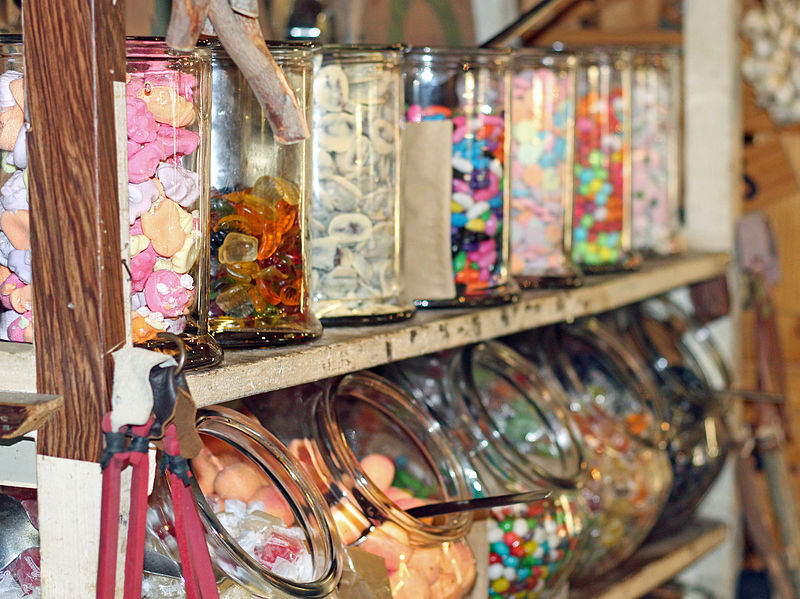 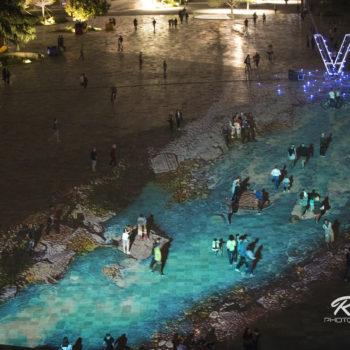 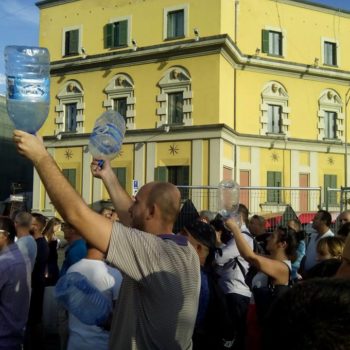